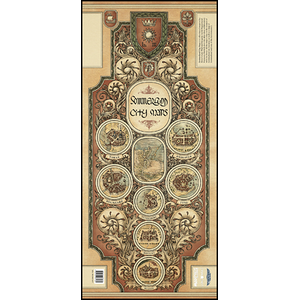 Tillverkare: Åskfågeln
Mer från Åskfågeln
Referens: 9789187987465
The Sommerlund City Maps is a dream project developed by the Italian cartographer Francesco Mattioli in close collaboration with Lone Wolf’s creator Joe Dever, Vincent Lazzari and the Scriptarium and Åskfågeln. Even though we had Joe Dever’s detailed descriptions from his books, his elaborate sketches and detailed input, it took a lot of time to get them finalized. Much thanks to the attention to detail by Francesco Mattioli and his beautiful penmanship. The style, the architecture, the flavor of each city is unique and carried through in his beautiful hand drawn maps, inspired by an old medieval map of Bologna.
We decided early on to make the maps justice by printing them in poster size. Holmgard is the most detailed map, and thus the largest of the ten. Some, like The Kai Monastery is considerably smaller. However, they all came with the same challenge. How do you keep them as gorgeous as they deserve when packed? Our solution was the specially made map tube. That allows us to roll up the maps instead of folding them, which makes them all so much more beautiful and easy to hang on a wall.
The Sommerlund City Maps contains the following 7 maps in full color – and with the most gorgeous illustrations on their back:
- Holmgard
- Toran
- Tyso
- Anskaven
- Moytura
- Ruanon
- Silvershore
795 kr
4 i butiken