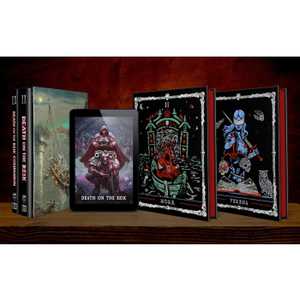 Tillverkare: Cubicle 7
Mer från Cubicle 7
Referens: CB72412
At the appointed time, we shall rise from our secret places and thrown down the towns and cities of the Empire. Chaos will cover this land, and we, the Chosen Servants, shall be exalted in HIS eyes. Hail to Tzeentch, Changer of the Ways! Njawrr’thakh ‘Lzimbarr Tzeentch!’

The Enemy Within Collector’s Edition contains the revised and updated Director’s Cut of one of the most highly regarded roleplaying campaigns ever written. The beautifully finished, exclusive Collector’s Edition set includes Death on the Reik and the Companion presented in a slipcase featuring the artwork from the standard editions.

The white elements of the design are imprinted in silver foil – items such as the borders, skulls, the grasping arms of the dead, and so on will have a really vibrant finish.

The printed elements have been kept to a minimum tonal palette in keeping with WFRP’s distinct style, and will have a Spot UV finish layered over them, so they’ll have something of a special finish as well.

As with Volume 1, the books are case bound, with a few extra little surprises tucked in that we won’t spoil here. We really enjoy creating these Collector’s Editions, and know that they’ll take pride of place on our own bookshelves for years to come as well.
Welcome to Death on the Reik, part two of the revised and updated Director’s Cut of the Enemy Within, one of the most highly regarded roleplaying campaigns ever written! Created by legendary WFRP writer, Graeme Davis, one of the original writers of the campaign, the Director’s Cut provides additional material to create an enhanced experience that maintains all the mood and paranoia of the original. Death on the Reik carries on from where Enemy in Shadows left off, taking your unlikely heroes on a grand adventure up and down the remarkable Reik, the largest river in the Old World and trade route to the heart of the Empire.

Death in the Reik includes:

A selection of ‘Grognard Boxes’ that add entirely new ways to play through the adventures, ensuring even those who have played the Enemy Within campaign before will find Death on the Reik new and exciting.
A complete guide to ‘River Life of the Empire’, detailing everything required to take your games of WFRP to the dangerous rivers of the Empire.
The Enemy Within is the campaign all roleplaying game enthusiasts should play at least once in their lives, making Death on the Reik an essential purchase for all gamers.

Death on the Reik Companion includes:

Exclusive Guest Commentaries from James Wallis and Martin McKenna on their memories of the original Death on the Reik.
A GM’s Guide including: a complete breakdown of the Red Crown, one of the Empire’s most dangerous Tzeentch cults.
Additional adventure content, including: The Emperor Luitpold, a luxury barge with a bevy of secrets in its holds and staterooms, and ‘The Vengeance of The Gravelord’, part 1 of an adventure thread that can be woven throughout The Enemy Within.
A selection of new herbs from ‘Hortensia Puddlefoot’s General Concordance of Herbs’.
An examination of life on the Reik with details on settlements and trade.
A Bestiary of monsters that haunt the river, and a list of waterborne diseases.
A wide range of riverfolk NPCs with hints and tips for how to incorporate them.
The Death on the Reik Companion is an essential supplement to the second part of Enemy Within campaign, and an indispensable guide for any adventure taking place on the Empire’s rivers.
1195 kr
4 i butiken