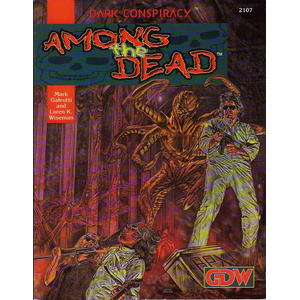 As the Earth slips further into chaos and despair, some places have far less to slide:

One of New York City's largest children's hospitals, funded by 'private donations,' is being used to provide orphans as human raw material for some unspeakable purpose. This could have gone on for a long time, had not one of the nurses stumbled on part of the secret. She vanished, just another victim of the city's lawlessness, but leaving a worried and suspicious uncle.

On another part of the globe, Moscow, amidst the ruins of a Russia blighted by pollution, war, hunger, and fear, there stands an age-old figure of unimaginable evil. Once he was called Koshchey Bessmertny, Koshchey the Undying, and he became the dark enemy of Russian fairy tales and folklore, a name to whisper when the moon passed behind a cloud. In the 1930s and '40s, they called him another name, and he became the sinister mind behind the deaths of millions in the Siberian Gulag.

What he does not know is that the disapearance of a simple provincial nurse threatens to bring these loose strands together into the noose that may at last catch him. If, that is, the players are able to face and overcome the horrors waiting them...Among the Dead.